(This section consists of 25 multiple choice questions with over all choice to attempt any 20 questions. In case more than desirable number of questions are attempted, only first 20 questions will be considered for evaluation.).

Which one of the following pairs will not form an ideal solution ?

Ethanol and acetone do not form ideal solution because hydrogen bonding between ethanol molecules is weakened by acetone which leads to positive deviation from Raoult’s law.

When NaCl is doped with , there will be a formation of :

When molten NaCl is doped with Sr2+, some of the Sr2+ ions occupy sites of Na+ ions creating vacancies of Na+ ions as each Sr2+ will replace two Na+ ions.

The structure of Oleum is:

Which of the following reagents will not convert ethyl alcohol into ethyl chloride ?

Hydroxyl group does not act as a good leaving group and does not displaced by a nucleophile. To facilitate the reaction, -OH group of alcohol is need to be protonated by an acid such as sulphuric acid.

Nucleotides are composed of a :

Nucleotide forms DNA strand and each nucleotide is made by:

The oxidation state of − 3 is least stable in :

Stability of -3 oxidation state decreases down the group due to increase in size and metallic character.

Amorphous solids may also be classified as

Which of the following reagents should be used to carry out the above conversion?

NaBH4 is a weak reducing agent than LiAlH4. It reduces only ketone group in the given compound.

An azeotropic solution of two liquids has a boiling point higher than either of the two when it :

In case of negative deviation from Raoult’s law, new bonds formed between molecules are stronger than the intermolecular forces between respective constituents. The tendency of molecules to escape decrease and boiling point increases.

Which of the following crystals will show metal deficiency defect ?

In the crystal of FeO, some Fe2+ ions are missing and for the loss of every three Fe2+ ions, two Fe3+ ions present causing metal deficiency.

reacts with KI solution to produce :

α-D-Glucose and β-D-Glucose differ from each other with respect to the : 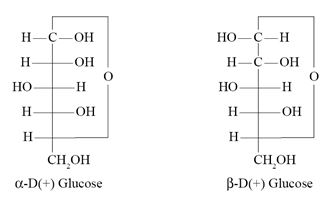 Tertiary alcohols give turbidity immediately with Lucas reagent as they form halides easily.

Which of the following is most reactive towards nucleophilic substitution reaction?

In case of haloarenes, presence of an electron withdrawing group (such as -NO2) at ortho- and para- position increases their reactivity.

Pressure does not have any significant effect on solubility of solids in liquids because :

Solids and liquids are highly incompressible due to absence of intermolecular spaces.

Main product in the following reaction is:

Which of the following forms strong p − p bonding ?

Which of the following halogens can replace all other halogens from their halidecompounds ?

Fluorine (F) can replace all other halogens from their halide compound because of small size and high electronegativity.

The functional unit that is repeated in a protein molecule is :

The lowest boiling point of ‘He’ is due to :

In case of helium, only weak dispersion forces are present leading to low boiling point.

The osmotic pressure of a solution increases if :

Chlorine reacts with hot and concentrated NaOH to give:

(This section consists of 24 multiple choice questions with overall choice to attempt any 20 questions. In case more than desirable number of questions are attempted, only first20 questions will be considered for evaluation).

Vapour pressure of dilute aqueous solution of glucose is 750 mm Hg at 373 K. The mole fraction of solute is : 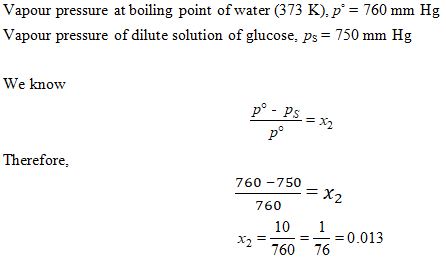 The bases that are common in both DNA and RNA are :

Which reagent is required for one step conversion of benzene diazonium chloride to bromobenzene ?

The number of lone pair of electrons on in , and compounds are respectively :

In vapour state of sulphur partly exists as S2 molecule and S2 molecule has two unpaired electrons in the anti-bonding orbitals. 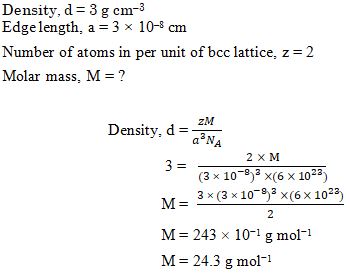 In the following reaction:

Which of the following has the greatest reducing power ?

HI is the strongest reducing agent among halogen acids because of lowest bond dissociation energy. 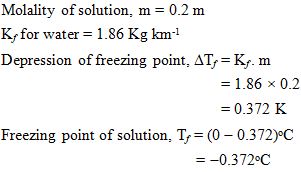 In a bcc structure, the packing efficiency is approximately :

NO2 contains odd number of valance electrons. On dimerisation, it gives N2O4 molecule having even number of electrons.

A compound forms hcp structure. The number of tetrahedral voids in 0.5 mol of it is:

XeF2 on reaction with PF5 forms:

Arrange the following compounds in decreasing order of their acidic character :

Which of the following compounds undergoes racemisation on hydrolysis with aqueous KOH?

Which of the following is not true ?

Among halide ions, iodine is the weakest oxidising agent due to its large size.

The IUPAC name of isobutyl bromide is :

Chlorobenzene when treated with sodium in dry ether gives Diphenyl. It is called :

Assertion (A) : is less basic than
Reason (R) : Nitrogen is more electronegative than phosphorus.

Ammonia (NH3) is more basic than PH3 as the size of nitrogen is smaller and electron density is more than phosphorous.

Assertion (A) : Due to Frenkel defect there is no effect on density of solid.
Reason (R) : Ions shift from its normal site to an interstitial site in Frenkel defect.

Frenkel defect is also called as dislocation effect. The smaller ion (cation) is dislocated to an interstitial site and no change in density observed.

Assertion (A) : Ozone is a powerful oxidising agent in comparison to O2.
Reason (R) : Ozone is thermodynamically stable with respect to oxygen.

Ozone is a powerful oxidising agent as it liberates nascent oxygen easily. Ozone is thermodynamically unstable with respect to ozone and it produces heat by decomposing to oxygen

(This section consists of 6 multiple choice questions with an overall choice to attempt any 5 questions. In case more than the desirable number of questions are attempted, only the first 5 questions will be considered for evaluation). 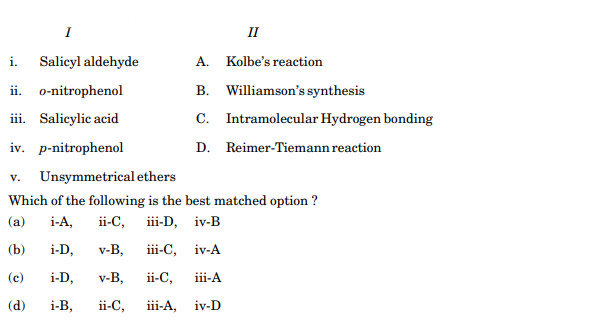 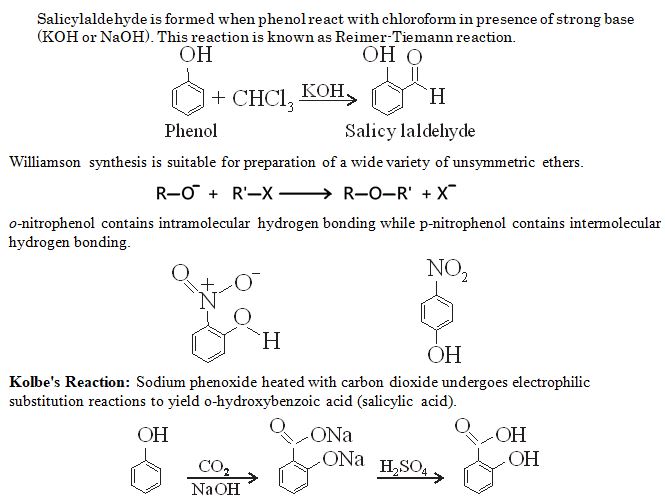 Which of the following analogies is correct :

Oxygen contains no d-orbital for bonding.

Cl2 is less reactive than ClF.

Xe form many compounds but He not.

Read the passage given below and answer the following question nos. 53 – 55.

Carbohydrates are polyhydroxy aldehydes or ketones and are also called saccharides. Glucose is an example of monosaccharides. Glucose (C6H12O6) is an aldohexose and its open chain structure was assigned on the basis of many reactions as evidences like presence of carbonyl group, presence of straight chain, presence of five -OH groups, etc. Glucose is correctly named as D-(+)-Glucose. Glucose is found to exist in two different crystalline forms which are named as and . Despite having the aldehyde group, glucose does not give 2, 4-DNP test.

Which of the following represents D-(+)-Glucose ? 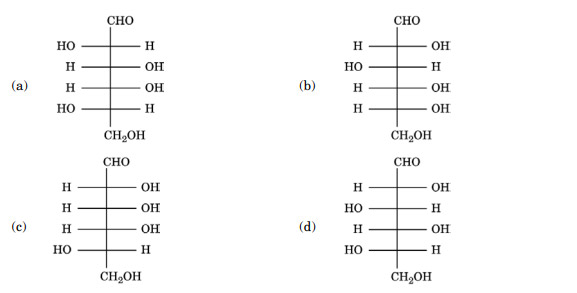 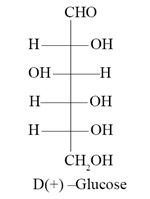 Glucose on oxidation with gives a dicarboxylic acid called saccharic acid. This result validates the fact that Glucose possesses :

The pentaacetate of glucose does not react with − indicating the absence of :

Have a Query? Call us we are here for you